The high-protein diet for weight loss

The high- protein diet for slimming , who has never heard of it? So disdained and criticized by some doctors, dietitians and nutritionists, as propagated in the world of gyms by the various “gurus” in the industry. It is therefore appropriate to clarify.
The question of protein needs  and how much protein is good to consume on a daily basis, is a topic in constant debate. Despite the scientific evidence to date found, we find people who still carry on the thesis on the damage generated by excessive protein consumption over time (problems, diseases, etc. .. in short, you already know the story). With the continuation of the article will be my concern also open a parenthesis on this aspect, to dispel these views permanently.

First of all let’s start by saying that the protein intake is a factor of absolute importance both from a health point of view and from a more focused one to sports performance and the achievement of a certain aesthetic and body composition. The purpose of this article is not to treat the role of proteins and which are the different pros and cons of a high protein regimen, but it is to provide all those practical devices that, if properly applied, can bring advantages relevant during a high protein diet suitable for weight loss.
Let’s take a brief introduction regarding the definition of a high protein diet.

What is a high protein diet?

In the scientific literature we find different definitions on the concept of a hyperproteic diet .
Who defines a diet as high protein when the proteins cover at least 35% of the total caloric intake consumed, who instead labels a diet as high protein since it exceeds the established RDA of 0.8 gr / kg, who is based on respect range to the body weight or to the lean mass, who instead on the ideal weight sought. So we have different views.
Personally I think that reasoning in% at both protein and macronutrient, leave a little ‘time found.

Some famous high protein diets are:

Which method to use?

The method that we will take into consideration (the one commonly used), is based on g / kg body weight , which provides reference ranges derived from different studies in the field and therefore with a fund of validity and logic greater than% grossolane. It would be even more sensible to calculate the protein intake for each subject compared to the lean mass and not to the total body weight.

At a physiological level, proteins are decomposed into amino acids, which interact primarily with lean mass to consolidate their plastic, energy and structural functions. Why then do we usually take into account total body weight? Simply because most people do not really know their own amount of lean mass,obtainable (with a margin of error sometimes also not indifferent) through various measurement techniques of body composition (plicometria, bia, dexa etc.). Given that for people with fat% we say acceptable, then not more than the 19-20% threshold for men and 29-30% for women, the difference between total body weight and lean mass is not so incredibly high, a few grams extra protein will not give rise to substantial differences from a practical point of view. Being the body weight easily detectable by anyone, even on a daily basis, for practicality it is used as a reference this last rather than the LBM (lean mass).

For those who are overweight, with high BF% (19-20% up for men and 29-30% up for women), it is more logical to consider lean mass rather than weight total body. This is because excess body fat will almost shield the muscle catabolism and once entered into a hypocaloric regime, these subjects will tend to be much more likely to keep their muscle mass intact (having hopefully a good amount if they are trained subjects ) and therefore the protein requirement will be lower, since weight loss will be almost exclusively dependent on water and fat (this only in the early stages of weight loss).

The ranges shown below are based on studies and scientific evidence to date found; you may find indications with slightly higher or lower values ​​but roughly this is how much. For subjects:

At the dawn of the Project it was hypothesized that endurance athletes, having a more pronounced muscle catabolism, needed more protein than resistance ones. This theory has been denied over the years.

Damages of a high-protein diet

Before understanding what rules it is good to establish and maintain during the continuation of this diet, we spend just two words to debunk the myth once again that a high amount of protein is closely related to kidney disease and bone problems.

Proteins DO NOT generate problems of kidney fatigue unless the subject already has a predisposition of genetic makeup or previous / current diseases. All the studies that showed that an excess of protein compared to the RDA of 0.8 gr / kg would promote chronic renal diseases due to the increase in pressure of the glomeruli, due to an increase in their filtering activity; they have been carried out on people with kidney disease already underway. All the studies carried out with protein intakes that also exceeded twice the amount of RDA, on healthy subjects, did not give rise to variations in renal function. For the problems at the bone level, the exact opposite is now known. Because proteins have a protective function and longevity for bone health, and numerous studies have shown how variations in the protein intake during childhood and adolescence can influence growth and the achievement of optimal bone mass. Especially for elderly people, a low protein intake is associated with bone mineral density problems in particular at the proximal end of the femur and the lumbar spine.

We close this parenthesis and resume the hyperproteic diet, going to touch those that may be the main tips / tricks practical that it is good to keep in mind.

The first tip is to drink water; drink, drink and drink again. Very often people ask themselves questions and are puzzled to understand what is the ideal split of macronutrients and the best meal timing and the most effective supplements etc. etc. and do not take into consideration or at least do not give due importance to their daily water consumption . How many times have you heard the phrase, are we made for at least 70% of water? Well, our muscles are made up of more than 70% of water, so it is clear how much a correct water intake is of fundamental importance for many, too many aspects of the muscles, but also at the hormonal and physiological level. A good general rule is to consume at least 1 liter of water every 20 kg of body weight(for sports subjects who train). Also choose a low residual water (<50), this will facilitate the body in the demineralization of this last and a correct diuresis. 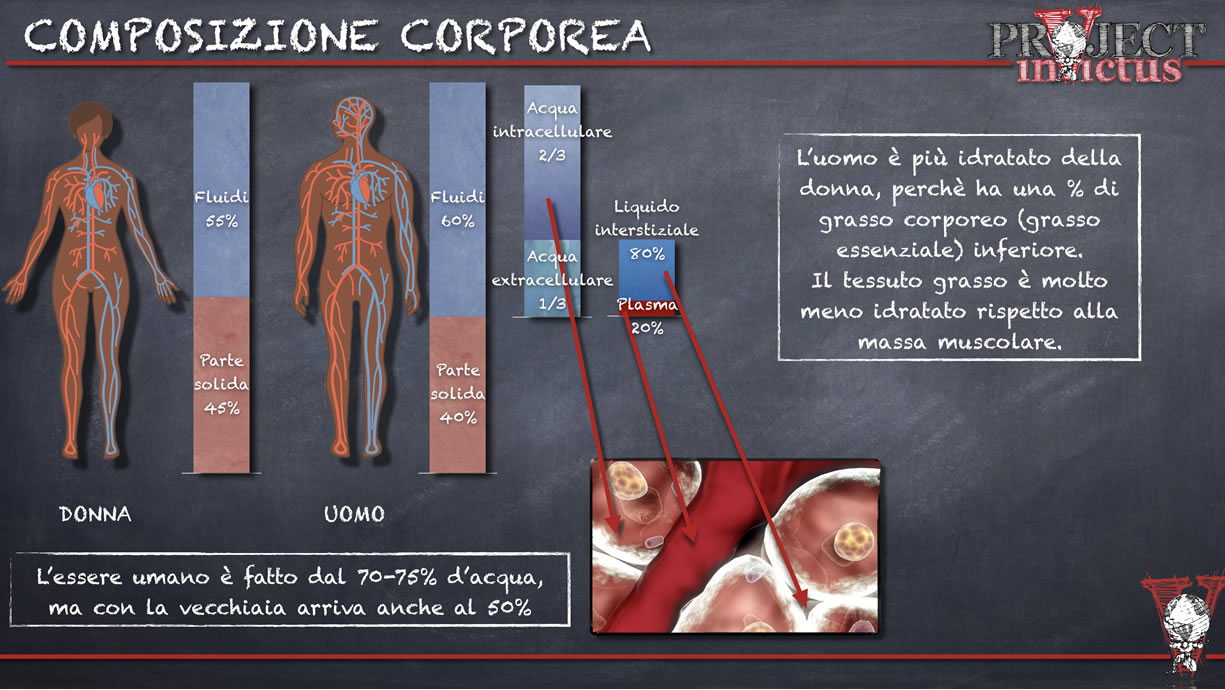 Do not overdo the proteins

The second piece of advice (which more than an advice is an observation) is based on the discourse that ” more is not always better “. Wanting to exceed all costs with protein intake will not bring better benefits but potentially only disadvantages. The proteins must be counted obviously in the daily caloric intake and therefore if you decide to increase them, although you are already consuming a quantity considered sufficient (from the previously reported ranges), you will then have to cut on the other macronutrients and I do not think in line in principle it is a very sensible choice.

The third advice / trick is to start near the lower end of the ranges above, then in the final stages of weight loss, possibly go to the highest or even slightly overcome it in some cases (see below). This seems to have a positive impact on the maintenance of lean mass, and at already low% of bf (<7-8% for men and <17-18% for women).

The fourth trick is to consider one’s morphotype (ecto, meso or endo). Assuming that virtually no one falls 100% in one of the three but that is always a mix of two or three, we give a very general guideline on which to take inspiration.

For a predominantly ectomorphic subject, the protein requirement will be higher, due to its much more accelerated metabolic activity (major protein catabolism), compared to that of a meso or endomorph. To understand each other by reconnecting to the ranges already indicated,

The fifth trick, to be made in the case you are not already doing, is to count also the “non-noble” proteins in the total protein of the day. Even “non-noble” sources such as cereals, legumes, etc. bring proteins that are incomplete at the level of amino acid, then joined together or added to the “noble” go absolutely text on the nitrogen balance and protein turnover.

The sixth trick is to divide the total protein daily into at least 3-4 similar assumptions (possibly a little higher in the pre and post-workout meal ). The organism will have less difficulty in carrying out any excess of nitrogen; thus maintaining a more balanced balance during the 24 hours. I want to clarify that there is not a certain limit to how many proteins our body is able to assimilate at a time, we see very well people make protocols of IF ( intermittent fasting ) and consume all the proteins of the day in a narrow time window and achieve significant improvements. If you have a way, spread the protein total over and over again, otherwise it remains an aspect on which you do not worry excessively.

The seventh is to vary the various protein sources during the day. Rotating food in general is an important factor, which will improve the various functions at the enzymatic level, accustoming the body to correctly manage the various foods. If you have a confirmed food intolerance or if you frequently have digestive problems with a particular protein food, then avoid consuming it and turn your attention to the others.

The eighth point concerns protein supplements such as protein powder, essential and branched amino acids. These can be a help in reaching the predetermined daily protein quota, but the advice is always to make a thrifty use and aim to reach as much as possible the target of proteins fixed by solid foods.

Last note that I want to clarify and that was implied by the above, is that if you suffer from kidney disease or if you have a family history with cases of members suffering from overt disease, it is better not to take substantial protein intake and in the case it is decided to exceed even the RDA of 0.8 gr / kg it will be necessary to monitor the general picture through frequent blood tests.

Conclusions on the high-protein diet for weight loss

We conclude by saying that the concept of a high protein diet is to be seen as a temporal period which should not substantially represent the alimentary habit “life natural during”. It is still unclear to this day if in the chronic (we still speak of many years) to consume protein needs important kinds actually real negativity. The advice is to alternate phases with high quantities during periods of slimming, in phases with more moderate intake, especially in periods of caloric surplus where the protein quota assumes a less important importance.

See Another Article: Nutrition Guide: What to eat before, during and after training