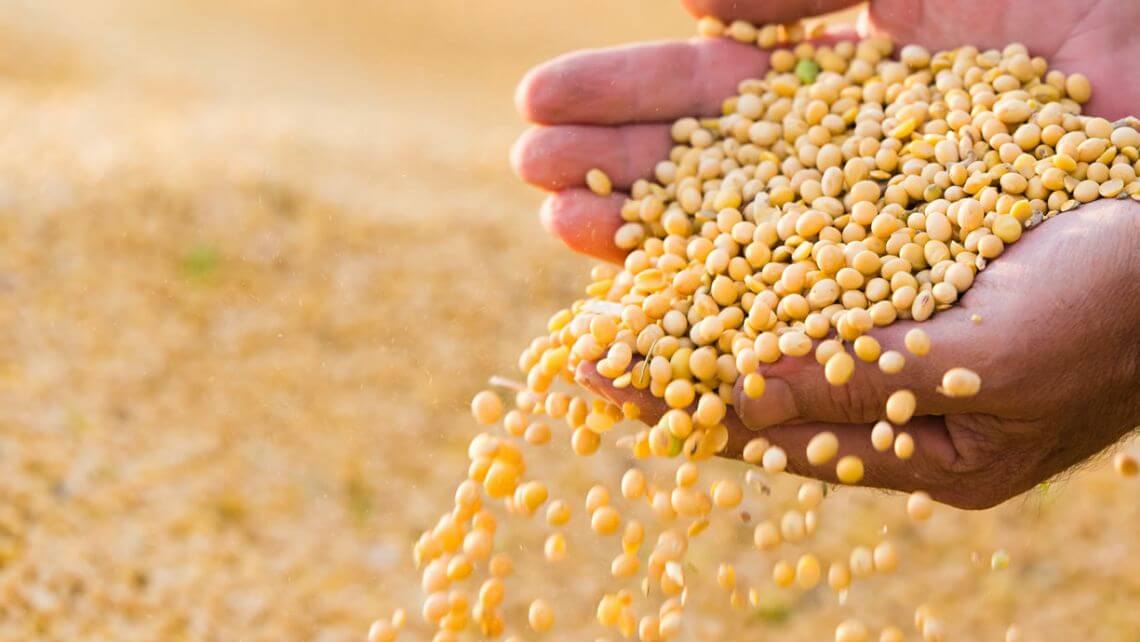 The soybean ( Glycine max ) is a plant native to China and today is among the most popular products in crops around the world; thanks to genetic engineering it was possible to modify it to make it more suitable for the environment and to pathogens (about 50% of GM crops are soybeans). The use of this legume and its components in human consumption are many: soy milk, edamame, tofu, tempeh, miso, soy sauces, texturized proteins, isolated proteins, soy flour, oil, soy lecithin  and many other products yet.

In agriculture it is used as a fertilizer plant (nitrogen fixative, common characteristic of legumes), in the breeding of livestock as a protein. It is used in the preparation of phytosomal (or lipoosomal) systems to carry drugs or low bioavailable active ingredients such as curcumin.

Like peanut , in fact it has an important lipid and protein component, while the glucidic component is relatively lower. Similarly, instead of other legumes, it is rich in fiber, B vitamins (in particular folate, B12 absent) and various minerals (magnesium, potassium, phosphorus).

Main characteristics of dry beans on 100g (according to USDA database):

Like other legumes, soy has some anti-nutrients that inhibit the digestion of its components and the assimilation of minerals: the ctine  (not to be confused with lecithins), which inhibit the activity of certain digestive enzymes, and phytates,  which have a chelating action towards minerals, that is to say they make them insoluble and therefore very difficult to assimilate. It would be more correct to consider the phytates not only as antinutrients, in fact they have beneficial properties on intestinal health and a certain amount of phytates is digested and decomposed by the microbiota  in phosphates and inositol . Inositol (also known as vitamin B7, mine-inositol) seems to be useful in the case of some diseases where there is a glycemic or insulin imbalance (metabolic syndrome, polycystic ovary etc …).

To reduce the concentration of these antinutrients, it is common practice to leave the pulses dry for several hours, taking care to rinse them and cook them in plenty of water.

Soy has other interesting nutrients and compounds:  lecithins  and isoflavones.

It is often used in the food industry as an emulsifier because it is able to keep homogeneous mixtures of food soluble in water and fat (mayonnaise, sweets, chocolate, spreads …). From a health point of view it is able to decrease the “bad” LDL cholesterol and has been used in the past a special formulation for the treatment of fatty liver (steatosis). Moreover, these phospholipids constitute a good part of the membranes of our cells.

They are mainly the Daidzeina and the  Genisteina . Chemically they are isoflavones , from the biochemical point of view they are called  phytoestrogens .

Soy isoflavones are quite special, as they have both estroegnic and anti-estrogenic properties at the same time. Without going into the details of their functioning, soy isoflavones are involved like human estrogens, in preserving bone density and in lowering LDL cholesterol. These effects are more pronounced in case of endogenous estrogen deficiency (ex: menopause ).

They also seem to be negatively associated with different types of cancer, such as breast cancer (behaving as anti-estrogens ) and prostate, or they would decrease the risk of development; on the other hand, consumption of soy in women diagnosed with cancer or previous cancer is more controversial, although consumption is probably safe.

In case of doubt about the long-term safety of the usual consumption of soy in these diseases, contact your doctor or specialist.

Often isoflavones of soy, as phytoestrogens, are accused of being “killer” of testosterone , however the effects on humans seem to be null or not significant, comparing consumption with quantities equal to or greater than those consumed by the Japanese population.
Their effects vary depending on the basal hormone levels and the individual ability to metabolize Daidzein in Equolo (more powerful); moreover, the Asian populations seem to be more sensitive to the protective actions of soy isoflavones.

Do you have any doubts about this, despite the research?

Consume it for a few months and monitor your blood tests (for example: HDL cholesterol, LDL, LH, FSH, T4, T3, TSH, anti TPO antibodies, Total Testosterone, SHBG, Estradiol, PSA etc …) with your doctor or endocrinologist. I advise you not to do everything yourself because it is easy to interpret your blood tests at will, not distinguishing the significance of a certain variation or the understanding of the physiological range rather than the physiological variations that exist from day to day.

Soy and its phytocomponents have a certain gozzygous action : in the mouse it has been noticed, as a result of soy-based feeding, an accumulation of Genistein  in the thyroid that has led to the inactivation of most of the thyroid peroxidases  ( TPO ), necessary to the synthesis of thyroid hormones . Despite this, no decline in the production of thyroid hormones was noted .

It has been seen that in humans the absorption of iodine  and drugs for the treatment of hypothyroidism (Levothyroxine sodium) up to 25% decreases . One solution may be to increase the consumption of sources of iodine, while if in drug therapy, change the dosage of the drug according to the blood tests and your doctor.

Despite this characteristic, it is quite difficult in man to develop goitre because of the consumption of soy ; in fact, it seems to be a relevant problem only in the case of consumption of large quantities of soy and derivatives in conjunction with poor iodine food intake, for example in hypothyroid infants fed with soy based formulations (effects that have been completely resolved with adequate supplementation dietary or pharmacological). Also in this case, especially if you are on drug therapy for thyroid diseases, be sure to inform your doctor.

The soy milk  is a derivative of aqueous extraction of soybean seeds. In reality it is not correct to define it as ” milk ” because it does not derive from the milking of an animal; furthermore, the current legislation does not allow it to be called “soy milk”, in fact it is correct to call it soy beverage .

On the market it is easy to find it flavored with cocoa, vanilla, in blends with other vegetable-based beverages (rice, coconut, almond …) or neutral. If flavored, it is often sweetened with sugars and added with a small amount of salt to improve its taste.

Often the soy drink is compared with cow’s milk, in fact they have some differences in composition that may be better or worse depending on individual needs:

Soy milk is also used to make tofu . Tofu, similar to cheese derived from cheese, derives from the coagulation of its proteins: different cords can be used and different textures can be obtained; the most used is the nigari which is magnesium chloride  (a salt), traditionally obtained from the separation and evaporation of sea water.

Soy milk is considered a food harmful to humans. This is one of the commonplaces due to the alleged (but not proven) feminizing properties on humans.

In reality, in itself it is not “bad” or “good”, but for the reasons stated before (nutritional values, isoflavones, allergy …) can be both a good food and a food to avoid. Total safety in the newborn is still uncertain, as soy-based “milky” preparations expose the newborn to very high concentrations of isoflavones; however, no adverse effects have yet been reported.

In general, it does not seem to represent a harmful endocrine interferent  ( if anything protective ), with some exceptions (see soy and thyroid).

The reasons why soy milk can be a beneficial food are those mentioned above; and generally we reiterate the absence of lactose (which is a positive aspect only for intolerant people, while for others it is indifferent, let’s make it clear), the positive impact on cholesterol (isoflavones, lecithins, polyunsaturated fats) and good general nutritional value. It is also the best plant substitute for cow’s milk (if in fortified version).

The soy proteins are, as already mentioned, inferior in terms of biological value , but still comparable to other animal proteins. If we consider the chemical value  (measurement in relation to the limiting amino acid) corrected for its digestibility (PDCAAS), we obtain a score equal to the egg or milk.

If they are produced by concentration, often by alcoholic extraction, they have more “impurities” (carbohydrates, fibers …), lower protein content and a low quantity of isoflavones; they are often found in food preparations or in extrusions of various sizes and formats (texturized proteins).
If produced by isolation, a greater quantity of isoflavones is conserved: with the same protein, it contains about half of it in the soy bean originally. The protein content is also higher, up to about 90%. These proteins are commonly sold as sports supplements .

To be specified, that in both cases, there is no guarantee that protein digestion inhibitors will be eliminated if there has not been a heat treatment in origin.

From the point of view of the amino acid composition there are two substantial differences with whole milk proteins: less BCAA , in particular leucine  (key amino acid of protein synthesis) and about twice the arginine (amino acid involved in the synthesis of nitric oxide, a potent vasodilator endogenous).

The soy flour  is obtained by grinding and toasting of the legume and may undergo a “degas” process, or may be deprived of a part of its lipid component, with the result of increasing the protein approto. Degradation occurs because this flour comes from the beans used for pressing and the production of soybean oil.

In addition to being used in the food industry and livestock breeding, it is possible to use it in the partial or total replacement of the most commonly used flours in bread-making and pasta-making. The advantage of its addition consists in a greater protein intake , better emulsion and the absence of gluten  (useful for coeliacs).

The absence of gluten may require, depending on the quantities used to replace wheat flour, the use of technological modifiers to improve the bread making and allow its leavening: for example the use of gums (such as xanthan) or starches pregelatinized.

Soy is an exception in the large legume family, it is the vegetable with the most complete aminoacid spectrum  , contains all the  essential amino acids  and is much more digestible.

Contains essential fats of the omega 6 and omega 3 series, contains lecithin that has several benefits on cardiovascular health, as well as isoflavones. The latter seem to have protective effects against some malignant  tumors (breast, prostate), and have no tangible negative effects on reproductive health. On the other hand, its consumption in newborns and thyroid diseases should be evaluated more carefully.

Its derivatives, consumed for a long time in Asia, are able to nutritionally support different preparations of the dairy industry, such as soy milk and tofu, and are an excellent substitute for a vegan diet . It also represents a more sustainable protein source of meat, and with several health benefits attached.

The main disadvantages of soy are related to the fragility of its crops (very common is genetically modified soybeans), the lower biological value of proteins compared to cow or egg milk and the lack of certain micronutrients if not adequately fortified (Calcium, vit.D3, vit.B12).

See Another Article: Gluten / what to know about it.