Caffeine: effects and dosages of a poorly understood supplement

Caffeine is an alkaloid contained in various plants: coffee , the , guarana , cocoa , etc. that secrete it to defend itself from animals (it is a natural insecticide).
Its sporting use has been extensively studied and currently high dosages are prohibited if taken before a competition, by WADA. On its ergogenic effect so it is not only presumed but real . To use it to the fullest, let’s find out, what there is to know about this interesting supplement.

Caffeine has a whole host of advantages, but also several disadvantages. The subjective answer will make sure that some people will find it useful to use it, others will become semi-dependent (caffeinism) and eventually someone will see them get worse or suffer too much side effects.
Let’s analyze its main interactions with the human body.

Among the main ergogenic effects we find:

Unfortunately, the effects are not only positive, in fact we can also have:

These are the most important effects of using caffeine. Depending on the dosages and sensitivity, it could also have opposite effects. 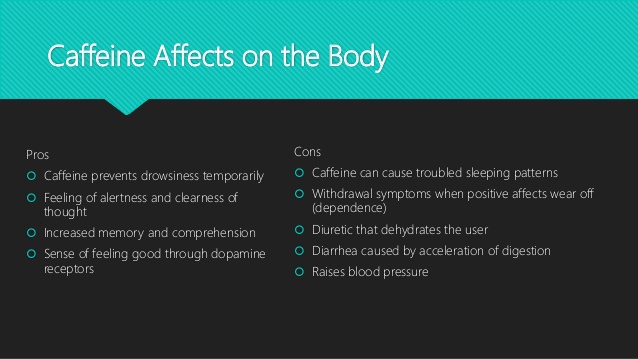 Contrary to what we might think and sincerely until recently we thought too, caffeine does not lose weight ! Or better not directly. Its ability to stimulate the metabolism, through a thermogenic effect, is very very limited and becomes addictive.
However it can help indirectly:

All these effects translate into a better energy balance at the end of the day (and as we now know that this is the only factor that affects fat loss).

It is interesting to note a little help in tacking stubborn fat , since caffeine disinhibits the enzyme phosphodiesterase  which inactivates the effects of adrenaline on adipose tissue (and not only). This effect is even more evident if we add  synephrine and yohimbine (two supplements in Italy that are still not notified, but outside the doping substances of WADA ).

The amount an athlete must take is very subjective. On average, to avoid habituation it is better to do 6-8 weeks of cycles . We will start with a minimum dosage of 200mg , up to a maximum of 800mg at the end of the cycle (the lethal dose for humans is 150-200mg per kg of body weight).
It is better to take it 30-90 ‘before training (on average, its blood peak reaches 120’ after its intake). In the days when we do not train, it is recommended to halve the dose.

Starting from 200mg the increases will be given based on the feedback of the subject, it is important to understand that excessive doses of caffeine lead to an overproduction of cortisol and have an opposite effect to our intent.

Here is an example of caffeine dosages in an 8-week cycle, followed during the hardest part of the diet:

The second value indicates the days that we do not train. After 8 weeks the athlete stops taking caffeine or goes back to 100-200mg.

Here instead we put a more specific protocol, because it is based on the weight of the athlete, so it is more precise:

In a body recomposition protocol , the person takes caffeine only on days of high calorie deficit (3-4 weeks).

Finally, let’s summarize how much caffeine is contained in food , even if our advice is to evaluate whether to take it as tablets in the form of anhydrous caffeine .

Caffeine is an excellent supplement , unfortunately not all people can and are well used to using it. Try, evaluate how you respond to the training parameters and draw your conclusions. As always, we do not expect to have something magical and really effective. However, if inserted in the right context with the right dose, even caffeine can help us to obtain the best results.