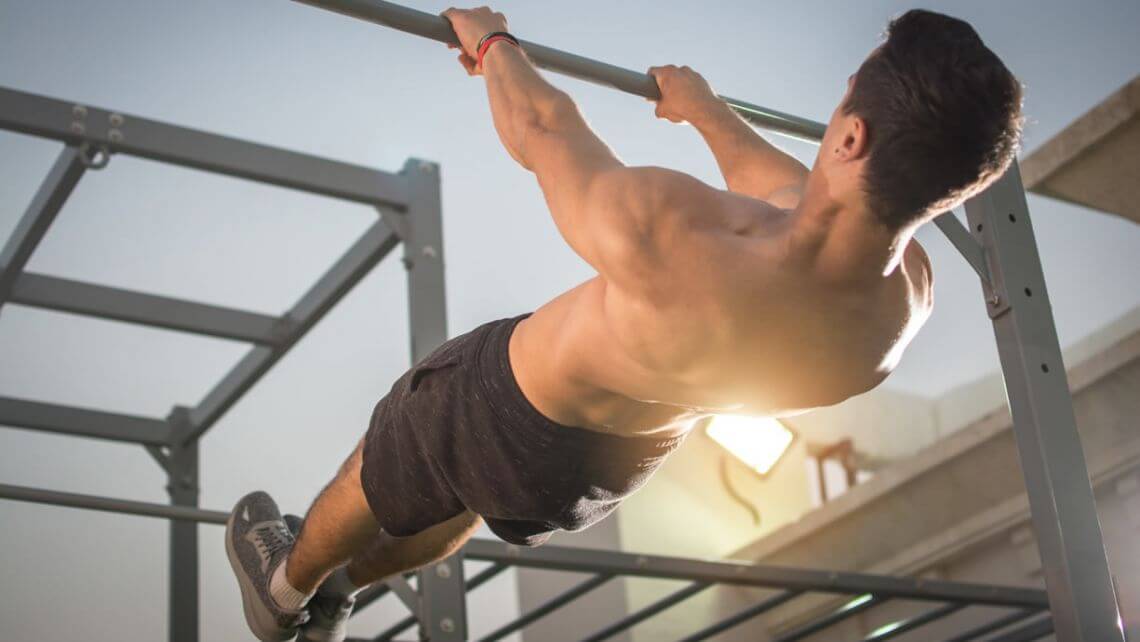 The Front Lever is one of the first skills that you try to learn in calisthenics , the first preparations are relatively easy and motivate those who try . Actually being able to bring home the perfect skill, it is not at all easy and as for all things, requires commitment, dedication and perseverance. In this short article we see the essential points to keep in mind when we want to master the front lever.

Muscles involved in the front lever

The shoulder is a flexed position but the muscles that must express force are those extensors: the large dorsal, the large round, the posterior deltoid, the longest of the biceps (which stabilizes), but also the triceps and the ribs of the great pectoral . The scapula must remain stabilized: the rhomboids, the trapezius and the great anterior serratus intervene. The shoulder must be depressedThe lower trapezius muscle, the dorsal granule, the pectoralis minor and the pectoralis major are thus activated. In order to maintain a horizontal position in the abdomen, the flexor muscles of the spine and all the abdominals must intervene. The pelvis must be well fixed and stable, therefore the activation of the gluteus maximus and of the hip flexor muscles is strong. Given the many muscles involved in the front lever , strength is expressed above all at the level of intermuscular coordination. It is therefore necessary to understand which muscles are contracted simultaneously.

Where to start? When to start?

Let’s start immediately by saying a hard truth: the longer you are long and heavy, the more the front lever lever will be difficult. The variable, therefore, is not only the weight but also the height: with an identical weight distribution, a higher subject will find more difficulty than a lower subject. Do not give up anyway, it’s full of examples of tall and heavy guys that I can do this isometric exercise.

The front lever requires both pull force and abdominal force, it follows that the preparatory exercises for this exercise represent the traction exercises (both vertical and horizontal) and those for the core.
Starting from the latter, you must become good in the boat and in the plank : in addition to putting general strength in the abdomen, will teach you and hold the position of retroversion of the pelvis , which will then be replicated during the execution of the front lever. Other exercises for the abdomen will be the L-sit and the dragon flag , much more advanced than the previous ones but that will put great strength on you.

From the point of view of the pulling force, I advise you to wait to be on 10 – 12 tractions before starting the specific training for the front; also train the horizontal traction (australian pull ups or body row ) will come in handy.

Let’s go on to describe, more specifically, the technique of executing the front lever, which will be, in its cornerstones, the same for all preparations.

We start from the arms, they will be held tense, in joint block . To succeed in this, since working with outstretched arms is not natural at all, you can initially think of pushing from the elbowsinstead of from the hands, this should help you to hold them out. In any case, any proprioceptive input that leads you to the correct position will be fine.

As for the position of the shoulder blades, they will have to be depressed. To do this, when you’re hanging at the bar, think you want to break the bar .

Initially I suggest you use a mirror or take back with the videos, to check the goodness of the position, until you acquire the proprioception to put yourself in the correct position without using these tools.

Preparatory for the front lever

Now let’s see the sequence quickly to get the skill. I made the photos yesterday between a storm and the other, I do not want if they are very rough 🙂

The first propaedeutic of the front Lever is the Tuck version, that is the one with legs collected. It is a very simple position to keep, if you have the traction prerequisites, but at the beginning it will be a little awkward, especially putting yourself in position. To do this, I advise you to start using a low bar, so that you can start dynamically with the help of the legs, not having to activate from scratch.

Important, especially at the beginning, is to keep the legs well gathered to the chest: if you do not, you will increase the lever and increase the difficulty of the exercise, leading to a level beyond yours. Warm up well, it is easy to take a contracture to the rhomboids, or to the dorsal muscle, when we still do not have the proprioception of how to pull with the muscles.

In this position the legs will no longer be gathered to the chest, but the angle between the femur and the bust will be 90 °. This will increase the difficulty of the exercise considerably. Furthermore, the problem of the retroversion of the basin is added, something that was absent in the collected version, as it came automatically. It is important not to collapse with the abdomen, forming a basin that is really ugly to look at and not very useful in the learning process.

If you can hold the front tuck for the indicated time but still do not succeed well in the Adv.Tuck version, you can use an opening of the intermediate leg angle, until you get to the full version.

In this position we would have a well-legged chest and a leg extended.
Difficulty of this propaedeutic is to keep the leg well in line with the rest of the body: it is easy that keeping a leg raised provokes the raising of that expanse, which will then be oblique and not parallel to the ground.

Also here, as in the tuck version, it is important to keep the leg in order not to increase the difficulty.

But why are we still here? Because the next version can be the same One leg.
In fact, this propaedeutic can be self-contained, that is, take you to the full version of the movement. Going to expand the collection leg you will increase the difficulty of the exercise, without having to use propedeutics such as the straddle and the half full lay which have very high mobility demands to be performed correctly.

The versions that you can use are those with one leg extended and one at 90 °, and gradually increasing the angle of the legs (used as a reference the foot of the leg gathered on the extended leg, so as to make it always the same, since you can measure the opening angle of the femur with the protractor).

It is not a propaedeutic that I like very much, because the difficulties in terms of mobility are much more than those in terms of strength; to keep the position correctly at the level of the leg line and the retroversion of the pelvis, you must have a very high mobility of the lower limbs, certainly superior to the final version (it follows that, at the specific exercise level, it is a “useless” mobility, obviously between lots of quotes).

It is also difficult to classify on the level of difficulty because it depends on the opening of the legs of the subject: there are those who can open very little and will find it extremely difficult, those who do it in splitting and will find it easier than one leg. For this, give fixed seconds to be taken with pliers.

Even the half-complete version presents difficulties in terms of mobility, but less than the spread version. Here we will be with the legs together and in line up to the knees, while the tibias will be kept gathered pushing the heels towards the buttocks. A very difficult propedeutic, once you dominate it you will not be far from the final version of the isometry.

Here we are at the final version!
To perform it correctly, you will have to have the arms outstretched, shoulders depressed, pelvis in retroversion and you will have to be parallel to the ground from the shoulders to the feet, which must be on the same line.

Let’s now see a whole series of dynamic exercises that can help us to train static positions. Generally, the dynamic exercises stress the nervous system less than isometric. This allows us not to overcook, alternating the stimuli.

In this exercise we will start from the final position of traction, ie with the chin above the bar, and from here we will throw back with our shoulders while raising the pelvis, arriving in a momentary position of front Lever.

It can of course be performed in all the propaedeutics, and it can be useful to understand how to activate when a propedeutics wants to move on to the next one. This is because the ice cream maker is easier than the isometric version in which we run it. Indeed, many do it correctly in the full version with at most a few seconds of one leg in isometry.

In this exercise we start hanging from the bar with arms outstretched, with the shoulder blades depressed and the pelvis in retroversion, and we go to lift the body bringing it in position of momentary front lever.

This exercise can also be performed in all preparatory work, and is easier than the isometric version: the full front lever raises will be easier than the complete isometric version.
An evolution of the raises are complete ones, where we will not stop at the horizontal but we will arrive in inverted hang, that is, upside down. These are much more difficult than the classical version, and are placed as difficulties just below the isometry.

In the pulls (not to be confused with the pull ups), we start from the horizontal position, and we should take us in reverse hang (upside down). It is a dynamic exercise that is more difficult than the isometric counterpart, to do it correctly you will have to keep the isometry about ten seconds.

Much more difficult than complete raises, even if the movement, in the final part, is the same: because in raises we arrive with the inertia of the thrust, while instead in the pulls we start from the isometry and we should generate enough force to move from that position.

Personally it is my favorite dynamic exercise.

Front lever pulls, very nice exercise to see how very difficult to perform. Here too, it can be done in all the preparatory views previously.

It is important that its execution, to be “valid”, must break at least the parallel, that is, get with the shoulder higher than the elbow. In the tuck version, you can use parallel / rings, as the legs would act as an obstacle against the bar.

Now that we have seen the first tips on how to run the front lever , we just have to see with a next article, what can be the programs to progress in the preparatory.